In 1915, the architecture firm of Delano & Aldrich completed an Upper East Side mansion for prominent New York couple Willard and Dorothy Straight. Two years later, the firm designed their carriage house a few blocks away. This service building was originally used as a horse stable and servants’ quarters and was later converted to a three-family apartment building, that is until it received a total renovation to become a single-family home.

None of the original interior details of the structure were intact before the renovation began, so historical preservation was not an overriding concern for this project. Instead, the focus was on making the space suitable for one family by reconfiguring the layout for optimal use.

New York City zoning laws dictate that the Floor Area Ratio (FAR) of a structure has a predetermined limit relative to the size of the lot. Because this carriage house had already reached its maximum FAR, floor space had to be removed before the making the necessary additions to turn this building to into a beautiful and functional piece of architecture. Three major changes occurred: a small side courtyard was used to house a staircase, elevator, and infrastructure like ductwork; an out-of-place addition on the back of the building was demolished to make way for a yard; and the second floor was removed, creating a double-height first floor and providing the requisite free square footage to add another floor on top of the building.

This new first floor, sitting on top of an already tall garage, added a sense of grandeur to the facade. The double-height windows celebrate the scale of the space, flooding light on the interior, which now contains a serene sitting room. This inviting area is decorated primarily in a palette of brown and beige, including a dark wood-paneled wall, light stone fireplace and dramatic tan curtains. A light blue grid-pattern rug and coordinating accents add a cool counterpoint to the warmth of the space.

Further back, a hallway passes underneath a glass interior balcony to the open-concept kitchen. White waterfall countertops make a striking juxtaposition against the dark wood cabinetry, while the white marble backsplash adds a subtle visual texture. The adjoining dining and living space, also unencumbered by walls, features a similar palette to the main sitting room with tonal shades of brown and beige, but varied with furnishings in bright blue and green. Additionally, a ladder bookcase fills a white wall with a rainbow of colorful book spines, and a wall-mounted modular wood desk offers workspace underneath. A glass wall at the back of the space opens to a furnished patio and serene garden.

Upstairs, the master bedroom features a similar focal point to the seating area below—a stone fireplace surrounded by rich wood panels. The furnishings, textiles and built-in bookshelves have a familiar palette of browns, and the light blue floral carpet adds a soothing touch. The expansive, spa-like master bath is outfitted with panels of white marble, an organically shaped freestanding tub, and a wood-encased mirror and vanity.

This project demonstrates what’s possible with ingenuity and an organized approach to determining what must go, and harmoniously arranging what stays with what needs to be added. The end result is a home that offers a living experience greater than the sum of its parts.

To see all projects, please visit: 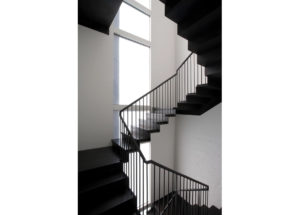