“Technically, this should be one apartment running front to back. Instead it was cut in half and made into two, so each has only one source of natural light. But sometimes you do only get one source of light in New York. Therefore, we worked with what we had.” — David Howell

The renovation of this classic SoHo artist’s loft both celebrates its imperfections while paying homage to its original tin ceilings, cast-iron columns and well-worn maple floors, which the owners stipulated in the brief to remain intact. The main issue facing the space was that it had no internal partitions and therefore, no private areas. Moreover, it is located on a low second floor on narrow, cobblestoned Mercer Street, and what little natural light it receives is through a single bank of windows at the street facing end of the apartment.

The task at hand was to create internal structure, and compartmentalize the floor plan in a way that afforded some privacy, while preserving the airiness that had initially drawn the owners to the space. To create a well-appointed master bedroom at the rear of the apartment that didn’t compromise on access to light and air circulation, David installed a dividing wall with a two-foot gap from the 12-foot-high ceiling. This also creates a subtle, but distinct transition from public to private space. Next to it, there’s a full bathroom large enough to contain a freestanding marble tub.

A newly enclosed office at the front of the space doubles as a guest bedroom and bathroom with an oversized slate sink. On the opposing wall, David designed a giant wraparound bookshelf as a screening device that hides the entrance to the freight elevator, and provides bike storage in the space behind it. Many significant interior design decisions were undertaken by the owners who, inspired by the Hotel Costes in Paris, wanted to create a environment based around an eclectic collection of found objects and art, including the 14-foot-long dining table from BDDW and the 1500-pound limestone bench made from the salvaged foundation of a Hudson Valley barn, both of which required the street to be closed off for hours while they were lifted in by a crane.

Likewise, artist Joe Biel created a custom mural for the couple that is filled with references to their life together, and remains as a work-in-progress. “It has a dual purpose of giving a sequence to the journey through the apartment, making it feel private but also accessible,” says David. “It’s the device that connects the front and back. It was an elaborate way of turning this truncated loft space into a story that takes you through different aspects of their lives and into their bedroom. The furniture is also important in this process, because the large scale supports it and makes this side wall feel expansive, and draws the eye through the space.” 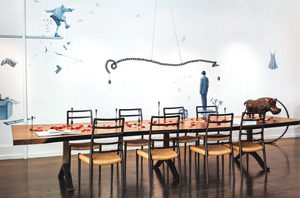