“One of the philosophies we apply to our loft design is creating a sense of place inside an open commercial zone. Just because you have a sofa and chairs doesn’t mean you’re going to want to sit there.” — David Howell

Designed to create the atmosphere of an elegant, intimate club within the structural bones of a former department store constructed in 1882, this generous apartment in the Soho Cast Iron Historic District has an elongated footprint that runs the width of a block, from the building entrance on relatively calm, cobblestoned Crosby Street to large windows overlooking the busy thoroughfare of Broadway.

Converted in 2001, it retains some intriguing legacies of the era, including a continuous 120-foot-long brick wall with integrated archways, iron Corinthian-style columns, and a 14-foot ceiling height — as well as a public gallery-style mezzanine overlooking the living area, which was added by a more recent owner. The architect’s mission was to celebrate these features, while creating new ones that were wholly unique to the client, such as the smoking room on a platform by the windows, and a wine cellar. The spaces were arranged in a line along the long axis, moving from the secluded bedrooms near the inner entrance to the more public, Broadway side.

Inside, the work focused on creating an internal world with multiple influences and layers, rather than opening the apartment up to the outside. Hidden behind a sliding metal door, the bedrooms and bathroom were heavily influenced by the client’s experience of hotel suites he had enjoyed on his travels. Lining the bathroom are hand-made tiles that a craftsman spent months carving to fit, and a bespoke silk wall-to-wall carpet was installed in the substantial but irregularly shaped master bedroom.  Per the client’s brief, the kitchen and living area also resemble nothing so much as a lounge bar in a luxury hotel, rather than a domestic space. Cold-rolled steel surfaces in the kitchen, and the deep tones of custom walnut cabinetry and paneling create a backdrop that anchors the space, giving it a sensual darkness.

Above the kitchen, temperature-controlled wine storage inverts the idea of a traditional wine cellar by moving it upstairs. Rather than open up this clubby space to the natural light, the floor-to-ceiling windows to Broadway were sound-insulated and veiled, and a sizeable glass cigar-smoking room was created with an independent air-conditioning and ventilation system. A second mezzanine lounge captures even more space, while the glass balustrade allows it to hover almost weightlessly above the dining table. The existing brick arches along this wall were filled with an intricate system of custom-made wooden drawers, some of them functional and some concealing lighting.

Behind the scenes, the architects created the full complement of lighting and air-conditioning over 18 months of construction, as well as hiding a large projector screen and the flue for the gas fire in the wood-paneled and antique mirror wall.

“When you have a big, naturally dark space and a lot of distance between the ceiling and the floor, there’s a challenge with lighting,” says David. “It gets absorbed no matter how many lights you use. In this case, the client loved this atmosphere, so the whole, eclectic creature was very much about the combination of crafts, materials, layers and artists: it’s very intensely and specifically designed for him.” 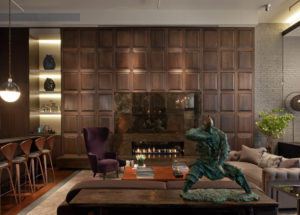