“We thought of this as our own little village, with a town square in the middle where you’d come together to commune with each other, and then split off to do your own thing in one of the antechamber-type rooms.”— David Howell

When renovation first began on this Union Square loft in the Flatiron District, it was 3,000 square feet of empty, open space, featuring 12-foot-high ceilings, large galvanized windows and four structural timber columns marching down its spine that dated back to the building’s construction in the mid-1800s. A bonafide piece of New York history, it was the Beastie Boys’ rehearsal room in the 1980s, and later a photographer’s studio, but had remained vacant for five years before David, his wife Steffani Aarons and their twin daughters made it their home.

The historic neoclassical building is sandwiched between two large office buildings, so the footprint of the fourth-floor loft inside is a long rectangle with windows at the two far ends. Natural light is present, but in limited quantities.

“We didn’t want to accentuate the fact that it was almost a corridor-like space, or make it feel like a box with doors leading off it,” says David. “When you have a long space, it’s essential to create different axes and paths that traverse it, which makes it more interesting and complex.”

The layout was redesigned as a central open area, a “town square” where the family could come together, with smaller antechambers arranged around the perimeter; four bedrooms running the width of the back of the loft, and three bathrooms, and a pantry, laundry and storage room along the sides, making 12 rooms in all.

The majority of the entries to the peripheral rooms are semi-concealed, either by a niches or walkways, so that the boundaries of the central area feel more fluid, less boxy.

The exceptions are the iron front door and the two nine-foot-high, solid-wood doors to the children’s rooms that stand side by side. “Those doors are like a symbol of the twins to me. The doors defined that area as their space,” says David.

Within the still-voluminous central area that remained, David laid an American black-walnut floor, with planks running crossways to give the living and kitchen spaces the effect of more width, and poured a resin concrete border around it. The effect is of a warm, handcrafted wooden “rug” that grounds and domesticates the space.

Different areas within this space were then demarcated with groupings of furniture, shelving and cabinetry. David dropped the ceiling over the living area beneath the large windows at the front of apartment to make it more intimate, and then allowed the ceiling to rise to its full height in the kitchen and adjoining dining area.

This cooking and socializing area was designed specifically to encourage the flow through the apartment to continue uninterrupted. “We didn’t want the kitchen to be a distraction, especially when it wasn’t being used,” says David.

He dispensed with overhead cabinetry and visible appliances, instead creating a long ledge holding art objects, and concealing the appliances and storage behind a curtain in the pantry and below the 16-foot-long Corian kitchen island, which doubles as a sculptural object in its own right. In this way, the whole space presents as a “non-kitchen” as well as a central gathering point for the family.

With the central open space and peripheral sleeping quarters, he says, the loft actually follows the model of an atrium house, only on a fourth floor and in the middle of a busy city, presenting a contemporary, urban version of a traditional domestic way of living.

“This is where our kids grew up, and could run around as much as they liked,” says David. “This was our home for a very important period of time in our family’s life.” 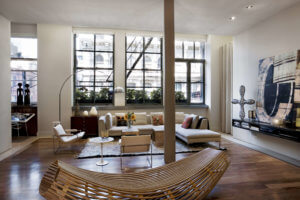