“Imagine if there was empty sky or a suburban landscape outside those windows,
or even the ocean. The white interior would look and feel totally different. In some
ways, it’s the New York grit that makes this work.” — David Howell

In this luminous, 3,000-square foot loft apartment, floor-to-ceiling arched windows became the natural focus of the full gut renovation — its first in more than 40 years. “Arched windows are classically old New York,” says David. “It’s like being in a
film-noir detective movie. Our aim was to celebrate the building’s history, and bring the focus of the spaces back to the loft’s incredible street views.”

Twenty feet across and reaching 13 feet at their highest point, the windows are a continuation of expansive street-level glazing that starts at the base of an iconic former bank (the Manhattan Savings Institution) and rises to the second floor, where the apartment occupies a corner spot overlooking Bleecker Street, with another view straight down Broadway.

The relationship between this heritage terracotta, limestone and cast-iron 19th century building and the loft inside is key, because while the owners deliberately asked for a white interior to act as a contemporary counterpoint to the lavish decoration outside the door, the design also involved a major restoration project. Tearing out later additions like mezzanine floors that unnecessarily broke up the space, DHD returned the ceilings, columns and monumental, but damaged, timber window frames to their original glory. The latter became an eight-month project involving five artisans to fix, hand-sand and finally bleach the wood to a soft, driftwood-grey tone.

David and the owners created a conversation between these period details and new features, including the highly polished Swedish beech floor planks and custom-built pocket doors. Within the airy, 33-foot by 33-foot main living area, David created moments of detail and warmth that attract the eye, with new lighting coves that bring ambient light to the space, the textural marble-slab counter surface in the kitchen and the 10-foot-long, eco-friendly fireplace inserted into a horizontal black niche along the wall of the lounge area. In the bathroom, Carrara marble with a subtle Rorschach-like pattern harks back to the classic luxury of the outer building.

“The key is in the juxtaposition,” says David. “You walk through these glorious lobbies, up the ornate, cast -iron stairs with their 120-year old marble and arrive in a pristine white space. You take your shoes off, and you live the white life.” 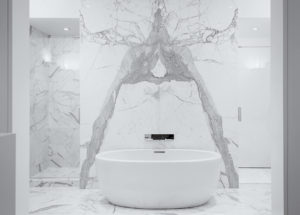