“The inspiration for this structure came from the art gallery owner’s fascination with Judd-like simplicity and his love of New York.

The footprint of this urban ‘loft’ is almost identical to a NYC 100-foot by 25-foot lot size, and the planning followed a simple separation of private and public zones internally.” – David Howell

New Zealanders are best known for building houses on suburban sites surrounded by gardens that provide a buffer to the street. So, this building designed for an internationally-minded couple in central Auckland, a city of just over 1.6 million people, is certainly a departure from the norm. A multi-use building that doubles as home and workspace, it is a highly considered response to both its occupants’ urbane lifestyle and the site on which it was developed.

The four-level building occupies a prominent corner on the city fringe, with the top two floors forming a generous townhouse and the street level accommodating a designer furniture showroom belonging to one of the owners. While this arrangement might be an established typology in many international cities, it is rare in sprawling Auckland, where inner-city living has been slow to take on and an hour-long commute to one’s workplace is not unexpected.

The site is ideally oriented towards city views and sun on its north side, where it also gains an extra level for basement parking from the fall of a sloping side street. But the location was not without its challenges. The main entrance opens onto a busy through-road and although it has evolved into a more sought-after address in the 10 years since DHD designed this building, the neighbourhood is still a gritty mixed-use zone. So, while it may have been tempting to open the upper living levels to the sun and aspect, there also needed to be a measure of enclosure and retreat.

One of the owners, an international art dealer, had worked with David Howell previously —designing a house in one of those aforementioned suburban locations. Eschewing convention and building that first project with concrete hinted at the aspiration to create something more urban, and with this project that desire was given full flight.

The footprint of the original building, which had housed a windscreen repair yard, was retained, as was the position of a staircase. But the design approach extended well beyond adding extra levels to an existing structure. Even the basement was gutted, with structural columns replaced by steel beams in order to create a more open and usable area. The street level was similarly stripped bare.

The two levels that were added are clad in solid glass-reinforced concrete panels that create an unyielding exterior and a buffer for the living zone. Mitigating the tough outward appearance is the refined finish of the concrete and translucent opal glass panels that enclose the ‘shopfront’. In the living levels, apertures are revealed when some of the concrete panels open like shutters to expose windows hidden behind the building’s otherwise solid face. Each shutter is operated individually, so the amount of transparency can be adjusted to suit the desired mood and time of day.

The main living level, which includes two bedrooms opening to an enclosed terrace, two bathrooms, a separate media room and central gallery, is enhanced by 11-foot high ceilings that rise to double-height over the dining table. Here, a soaring picture window frames a view shaft across a busy intersection towards the city centre, and provides the only glimpse from outside into the otherwise blinkered interior.

The ability to display large artworks was an important driver of the interior spaces and within the open plan generous wall areas have been created to accommodate a striking collection of large-scale artworks. A simple palette of materials —white walls and black granite floors — enhances the gallery-like setting for the owners’ collection of international designer furniture pieces.

The top level is given over to the master bedroom suite, a mezzanine office that is open to the double-height void, and a music room. But the unexpected crowning glory is a terrace carved out of the western end of the building. Up here, with views stretching beyond the surrounding rooftops to distant ranges, you are in a sun-drenched garden setting and a world of your own.

To see all projects, please visit: 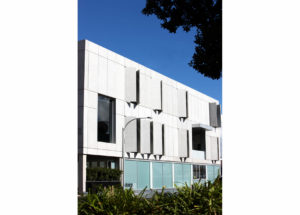