“One of the curious things about New York City is that people are very tolerant of everything, including potholes in the street, bad lobbies, horrible hallways — they’re forgiving until they get to your front door. Once they open your door, that’s your moment to express what you want in terms of your own home.” — David Howell.

In its original state, this Laight Street Loft in Tribeca had all the elements that attract most people to former commercial spaces. One of four red-brick 19th century warehouses on a picturesque cobblestoned street, it had brickwork, exposed beams, windows on every side, and open space to burn.

DHD was initially engaged to refinish the floors, but as the architect and client built up a rapport over the design process, and the real potential of the project became apparent, it grew into a full gut renovation.

The space’s initial conversion to a residential apartment, in 2001, had left it serviceable — but the layout had some major flaws. The entranceway was awkward, and visitors were shuffled through its enclosed space into the kitchen without getting any sense of the scale of the apartment. The door to the master bedroom and bathroom was also positioned at a halfway point in the kitchen, effectively splitting the space in two.

The architects’ first step was to open up a diagonal sightline from the front door, through the kitchen, and to the banks of floor-to-ceiling windows that run across the outer wall.

“That moment was important, because it’s the longest view we could have across the apartment,” says David. “Opening it at the point of arrival allows you to immediately see and grasp the dimensions of the loft you are walking into.”

Next, DHD substantially reorganized the interior spaces to create an unimpeded circular path through the apartment, a device David often uses in loft projects.

“We planned to create freedom of movement, which is one of the reasons people gravitate to these renovated commercial buildings,” says David. “When you can walk around an apartment without ending up in a cul-de-sac at any point, that openness is supported by continuity.”

The flip side of this, however, is that these unbound spaces often lack the architectural hierarchy that allows for areas on a more intimate scale, which allow people to stop, gather or be quiet.

To counter this, the architects created resting places along the circular path, anchoring the dining room with a dramatic marble fireplace and stone wall, for example, and establishing the living area as a quieter space with lighting and drapery that muffles the noise, both acoustically and visually.

A home office, which occasionally doubles as a guest room, became a secondary space, allowing traffic to flow through while remaining semi-private. With the intrusive bedroom door removed, the kitchen came back together as a single, cohesive space, defined and given warmth by rift cut white oak cabinetry.

This bedroom then became the third type of space. Set back from the main flow, it is the only completely contained, private space in the apartment. Similarly to the luxury hotel rooms that initially inspired the client, intimate lighting, a lower ceiling height and large area rug muffle sound and define it as a sanctuary from the racing pulse of the city.

Before, says David, the loft was just an empty shell. The renovation has given it soul, activating it with a subtle layering of spaces that allow both free movement and moments for spatial and emotional pause. 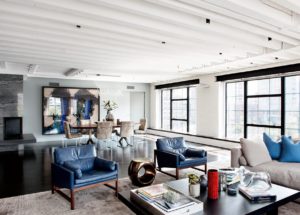