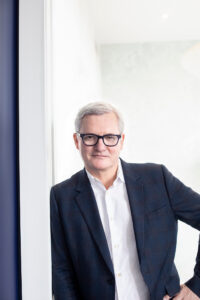 david@dhd.nyc
⁠
David Howell has a 30+ year background as an architect and designer. A native of New Zealand, he was trained at the University of Auckland, where he received a Bachelor of Architecture degree with honors. He is a registered architect in the state of New York and in New Zealand, and he is a member of the American Institute of Architects as well as the New Zealand Institute of Architects.⁠
⁠
Howell established his first solo architecture practice in Auckland in 1990. He relocated to New York City in 1992 after receiving a Queen Elizabeth II Arts Council of New Zealand grant. He served with Clodagh Design International before founding DHD Architecture and Design in 1995.⁠
⁠
As envisioned from its beginnings, DHD has always been a special cross-cultural meeting ground, and Howell has served as a mentor bridging the American and Antipodean design communities. His work is distinguished by this pairing of distinct philosophies from two hemispheres, where the towering history of New York and America’s manifold architectural traditions merge with the indoor-outdoor living, modern idioms, and relaxed environmental design common to New Zealand and Australia. Howell’s diverse experience shows in the range of his assignments, on landmark building restorations and loft conversions; office, restaurant and store designs; and private homes all over the globe. His approach is open, lively, and inventive; yet it is always perceptively local.⁠
⁠
David Howell has been recognized with numerous awards and his work appears in many national and international publications. He has been exhibited widely in both New York and New Zealand. He lives in Manhattan and the Catskills with his family.⁠